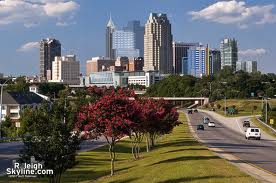 Bloomburg released an article on April 29 ranking the top Boomtowns (fastest growing cities) in the United States. To be considered a Boomtown, Bloomburg created a score based on the increase of two major factors- population and gross domestic product- according to US Census data. Only areas with the population of over one million were considered in these rankings. Raleigh/Cary ranked third, while our neighbors to the southwest, Charlotte/Gastonia/Concord, ranked tenth.

Bloomburg credits technology companies for Raleigh/Cary's growth, specifically naming IBM, Cicso and Lockheed Martin for creating over 40,000 jobs. These jobs were earned by not only North Carolinians, but also by workers from all over the world. The Raleigh/Cary region had an increase of population by 11.06% between 2007 and 2011. The gross domestic product growth during that time span was 1.49%.

Significant Growth in the Charlotte Area.

As for Charlotte/Gastonia/Concord, Bloomburg credits growth to US Airways for having their largest hub at the Charlotte Douglas International Airport. The banking industry has also been a huge draw, despite major layoffs and the financial crisis. The Charlotte/Gastonia/Concord region had a population increase of 8.71% between 2007 and 2011. The gross domestic product growth during that time span was 0.14%.