The developers of the proposed $135 million Parkside Town Commons project in west Cary are adding a hotel and shifting the focus to more retail versus residential. A new plan submitted to the town of Cary shows that Kite Realty Group, the Indianapolis-based developer of the project, has eliminated plans for office buildings, reduced the amount of small-shop space, changed plans for an apartment complex and added a 140-room hotel.

Parkside Town Commons would be on a site at the intersection of O'Kelly Chapel Road and N.C. 55 near the exit ramp for the Triangle Expressway. The Parkside Commons property abuts the boundary line for Research Triangle Park near the campuses for Fidelity Investments, Cisco Systems and NetApp.

Few of the changes would impact the first phase of the project, on which construction could begin in 2013, says Mark Jenkins, a senior vice president with Kite Realty. The first phase is expected to be anchored by a Target store and a Harris Teeter grocery store, although neither retailer has confirmed plans for the location, which is projected to have 243,000 square feet of retail and restaurant space.

It's been five years since the original plans for Parkside Town Commons were submitted to the town, and much has changed regarding the expectations of the real estate market since that time, Jenkins explains.

For the northern piece, it's a complete redesign, he says. We're starting all over.

Jenkins says the earlier plan incorporated more small shops, but the shift of the economy has hit smaller retail operators much harder than the larger anchor and junior anchor tenants, which can fill a regional shopping center quicker. Kite Realty submitted the changes so it could have more options for bigger retailers on the Cary land development site. It'll be nice to have more anchors instead of depending on, 'if you build it they will come', Jenkins says. I can say that we've experienced a lot of activity on the site in the last 90 to 120 days. We feel real good on the leasing side.

Kite Realty and its joint venture partner for the project, Prudential Real Estate Investors, have so far invested more than $64 million in the Parkside Commons project, including $41 million that was paid for the land in 2007 and 2008, according to Wake County deed records and documents that Kite has submitted to the U.S. Securities and Exchange Commission. 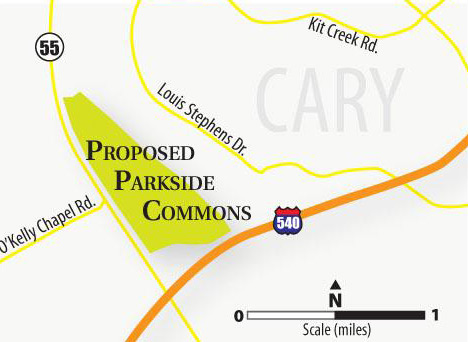 In retail Development, a project's success is often determined by the amount of pre-leasing before the building is even finished. At the Holly Springs Towne Center retail project that Kite Realty is building in Holly Springs, for example, nearly half of the 570,000 square feet of retail that will be opening in March is already committed to specific retail and restaurant tenants, including Target, Marshall's, Dick's Sporting Goods and Michael's. Jenkins says the firm has already started marketing buildings for the second phase in Holly Springs.

Holly Springs is going to blow people's minds when they see how many retailers are open come March 2013. We are leasing space at a velocity that is very encouraging, he says. Retail development analyst David Conner with the Lincoln Harris real estate firm in Raleigh, says the developer of Parkside Town Commons shouldn't have to worry about finding tenants for the project. If you look at the growth of new homes in that area over the last 10 years, it's been off the charts, Connor says. I think there's a lot of pent-up demand for new retail and restaurants out there.

Connor notes that the Parkside project would open up a new back door road to Research Triangle Park and to south Durham when it extends O'Kelly Chapel road from N.C. 55 east to connect to Louis Stephens Drive across the CSX railroad tracks.

According to Cary's director of engineering, Tim Bailey, part of the compromise to extend the O'Kelly Church Road across the railroad tracks is an agreement signed by the town, CSX and the N.C. Department of Transportation to build a $17 million bridge over the railroad at Carpenter Fire Station Road to the north of Parkside. Kite Realty, as part of that deal, has to committed to pay $500,00 toward the bridge construction project.

Thanks for stopping by our land development news blog. We hope you've found the information helpful and feel welcome to contact us directly on social media if you have any questions or suggestions. If you have an upcoming land development project, please be sure to keep us in mind and you can use our contact page at any time to submit business related questions. If you've found this post helpful, share with the social buttons below and definetly take a look around our blog for more interesting topics.

Discover Some of Our Latest Blog Articles