Land Use Zoning for Home Buyers 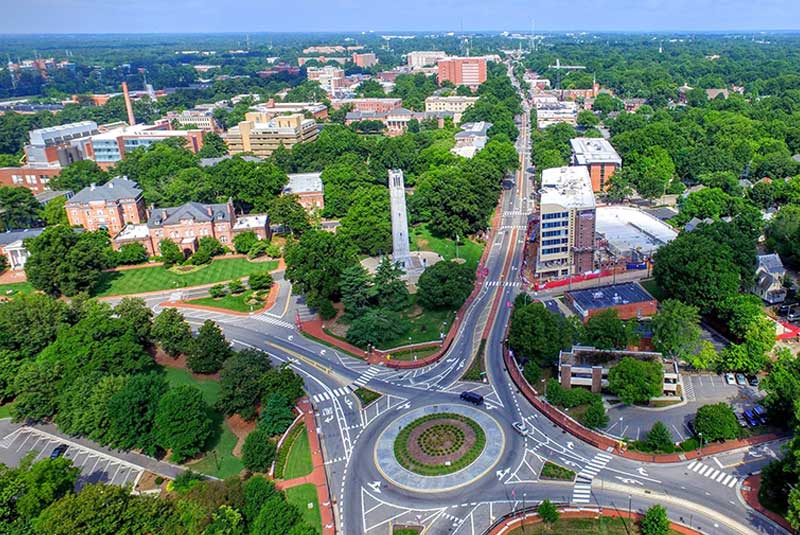 If you ever walk down NC State University’s Hillsborough Street you may not immediately think of land use zoning, but one thing will become abundantly clear: it’s almost exclusively older, single-story businesses. An abundance of attached storefronts parallel to a university seems like common sense at first, but it’s not that simple. In reality, there’s something of a science that details what purpose those buildings get to serve: land use zoning (or just zoning, for short).

What is Land Use Zoning?

Zoning is a term used to describe how local municipalities designate various parcels of land (zones) for specific uses. The primary philosophy behind how it works is simple: keep mostly incompatible property uses separate from one another. A city wouldn’t necessarily want to allow an enormous warehouse to be built immediately next to townhomes on account of their dissimilar purposes and conflicting interests. Along with knowing how it works, one also ought to be familiar with the primary land zoning types.

Residential zoning types correspond to a density ranking between R1 and R10. An R1 ranking would indicate very low density in that area while an R10 ranking would indicate extremely high density. This would mean detached single-family homes on large lots would best support R1 areas while high-rise apartment buildings would best accommodate R10 areas. It should be noted that these residential zoning types are relative to the cities they’re designed for. An R1 in Raleigh might mean detached single-family homes, but an R1 in Brooklyn might mean three-story brownstones.

Commercial zoning laws determine whether an office building or a bar is best for an area, while industrial and manufacturing zones are set depending on a facility’s noise or pollution output. Cities with rich histories often use historical zoning to protect culturally significant buildings. At the same time, cities can also help foster new identities by utilizing the management tools of aesthetic zoning. Cities boasting high populations are beginning to take advantage of combination zoning which integrates residential, commercial, and office spaces into single zones. Perhaps the most important point to raise is that no zoning decision is permanent. Cities will rezone areas to best suit their needs as they arise. A fast-growing city may decide to rezone an underperforming industrial area downtown into an R5 residential zone to accommodate a steep rise in population.

Furthermore, each type of zoning has its own set of laws. These laws can include material building and noise restrictions, height limits, rules on animals, waste regulations, and more. Zoning laws differ state to state and even city to city. This means that Raleigh’s residential zoning laws for R1 buildings might be entirely different from neighboring Durham’s. Specific laws can be found by inquiring at your local department of housing, or your mayor’s and city attorney’s offices. Public libraries also tend to contain both recorded and current zoning ordinances. Gated community and homeowners association residents should also note that covenants and conditions will often encompass local zoning laws. Also, due to the rise of the internet, zoning laws are increasingly being posted online on city government websites.

The Effect of Zoning on Community Growth

Following the zoning of an area, the local government will begin to classify the buildings constructed there. Typically, there are three types of building classifications: class A, B, and C. Class A buildings are considered the best possible buildings on the market. They will be the newest and will have a superior infrastructure, excellent management, and an unbeatable location. As a result of their eminence, these buildings command a premium rent. Class B buildings, on the other hand, will be a bit older and in a less desirable location. However, they will still be well maintained and managed, and they will boast a lower lease than their Class A counterparts. Class C buildings are often in undesirable areas and need both extensive interior and exterior renovations. Due to their inexpensive rent, investors will hold Class C buildings if their location is ripe for revitalization, as has been the case with areas like downtown Raleigh and Bedford-Stuyvesant in Brooklyn. Buyers should also consider that building classifications adhere to its market in the same way that zoning does. This means that class B buildings in Raleigh might not translate to class B buildings in Los Angeles. As a result, intuitive knowledge of the specific real estate market is required to ensure that buyers get what they’re paying for.

Whether you’re planning a new home in the suburbs or buying a renovated office space downtown, no knowledge will be as valuable as understanding what zone you’re in, what type of building you’re dealing with, and how to make sense of it all.