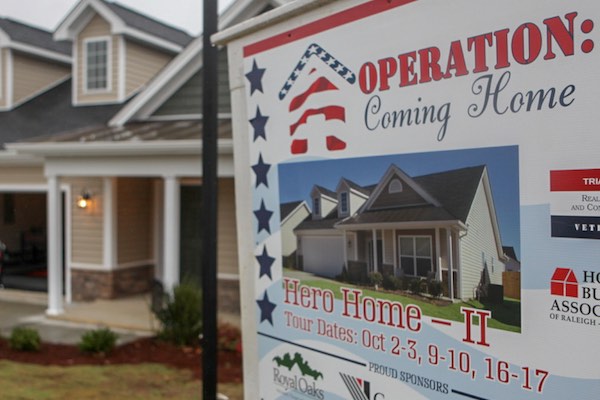 Things always seem to move faster around this time of year, and there’s a good reason for it. Last month was a time brimming with celebration, giving thanks, and preparing for the winter holiday season, now in full swing. With so much going on it can be easy to forget that November also hosts a much quieter and reflective holiday: Veteran’s Day. People, the nation over, take time on November 11th to consider the sacrifices made by those in our armed forces. While some spend their days with family members who’ve served or mourning those they’ve lost, others spend the day trying to selflessly give back to those who have given all they can. One such example of this can be seen locally in the form of an annual event that transpired here in the Triangle.

The United States saw 35,000 of its men and women wounded while fighting in the wars in Iraq and Afghanistan. Many of these injuries were life-changing and demanded immense physical and emotional adjustment for these soldiers coming home. The financial cost of sustaining such intense trauma became even more apparent as additional soldiers continued to come home with these kinds of debilitating injuries. With this in mind, a local group of builders teamed up with the Home Builders Association of Raleigh-Wake County in 2007 to help actualize a veteran’s dreams of home-ownership. Following the massive success of the project, the group knew they had to continue with their efforts, which led to the founding of the US Veterans Corp.

The following year the group sought out an additional service-member, Sergeant Joey Bozik, so they could also build his family a home that accounted for his additional lifestyle considerations following combat. Emboldened by their goal, the group contacted more businesses within their network to aid with the project. Touched by the cause being represented, local building companies gleefully responded and committed their available resources to Sgt. Bozik’s new home. With the success of two homes’ construction behind them, the group determined and succeeded in making the construction of Hero Homes a yearly effort. What started as a simple project became an annual tradition in which ordinary people and businesses alike give their time, money, and labor to volunteer for veterans with the goal of constructing free homes, called Hero Homes, for those who were seriously injured in combat.

November 9th of this year marked the tenth year of OCH and the presentation of the eighteenth Hero Home built. This home was presented by Mattamy Homes and their partners with special guest North Carolina Governor Roy Cooper to Marine Corporal Nate Rogers, who served between 2002 and 2005. On top of raising money for the homes themselves, the businesses also created unique methods of fundraising for items not directly donated via the Hero Homes, themselves. One such event, organized by Fuller Land & Development, is the annual Sporting Clays Tournament at Drake Landing in Fuquay-Varina. This year’s event saw 160 shooters across 40 teams, with BuildersFirst Source, Fuller Land & Development, Avison Young, City BBQ of Cary, and Nexsen Pruet as the headlining sponsors. Following the morning shoot and lunch, the participants had a chance to win exciting prizes and participate in a shot gun raffle. This mixture of teams from the real estate community, both old and new, collectively raised $34,000. Just as the events during Operation: Coming Home have grown in scope over the years, so too has the project itself. Operation: Coming Home has moved past its original goal of just providing a single donated home so that it now strives to annually donate two homes, and it might move well past that due to the high demand for veteran housing. National organizations such as Homes for Heroes and Veterans Build have yielded equivalent levels of success even with their broader scopes, with the two organizations mentioned above averaging thirty and 180 builds per year, respectively.

A Commitment to Protect Those Protecting Us

The men and women of America’s armed forces have proven time and time again their commitment to protecting the freedoms we hold dear, no matter the cost. As the holiday season dawns on us, it’s essential that we take time to give thanks for what we have, but also for how we have it. Efforts to help ease the tumultuous lives of returning veterans also act as a means of expressing the nation’s heartfelt gratitude for the sacrifice these brave service members make. It’s thankfully not a surprise that efforts like Operation: Coming Home, with its earnest cause and execution, are a brainchild of the Triangle; a region which continues to lead the nation in so many disciplines and respects.