Pretend and Extend at an End - Triangle Construction 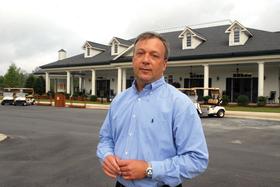 Wells Fargo’s predecessor company, Wachovia Bank, invested about $99 million with the original triangle construction developers of the two communities to finance the purchase of land and the construction of roads and other infrastructure, according to county records.

While construction of 12 Oaks was already well under way and operates under a receivership arrangement, no home lots had been sold at Wendell Falls when the real estate market crashed. The bank foreclosed on the property in 2010 and has since reached a revised development agreement with the town of Wendell that will allow it to move forward under new ownership.

Under the direction of General Manager David Mason of LandTech Inc., 75 homes at 12 Oaks have been sold since Jan. 1. We’re now performing at a level that everyone expected we would be at this point, Mason says. We feel like they are poised to be offered now, says Bill Honaker, mid-Atlantic regional manager for Wells Fargo’s special situations group that handles what’s called other real estate owned, or OREO. OREO holdings can include home mortgage delinquencies, but a large portion of a bank’s OREO portfolio is vacant land, residential lots or other property that was secured by a commercial type loan or note.

Honaker says his team of three people, which manages about $300 million worth of real estate owed by Wells Fargo, has been working for more than a year to resolve issues that could devalue its OREO assets in the mid-Atlantic. Our strategy is more to create value where there is value to be had, he says. We analyze, put a strategy together, then hopefully put it to market in the best light.

SunTrust and BB&T have been assigning properties to third-party brokerage groups to market to potential triangle builders. Justin Good, a land specialist with the Cassidy Turley commercial real estate firm in Raleigh, says about 70 percent of the deals he’s marketing are bank-owned properties. Some lenders are more exposed than others, and some have taken a more aggressive sales role, he says. It depends on the bank’s balance sheet at the end of the day.

Benson, the real estate lawyer, says that while the bank foreclosures have hurt the developers or investors who lost their investment in the properties, the quick disposition of distressed triangle construction properties is good for the market in the long run.

"The bank doesn’t have any emotional investment, so they are more likely to take an objective look at the property and what it’s worth – warts and all. It gets the property back on the market for what they actually should be bought and sold for.”

Jim Anderson, president of real estate consulting firm Fuller Land & Development in Raleigh, estimates that Triangle banks have worked through about half of the real estate deals that were most at risk of bank foreclosure and re-sale. The banks are going to be in the business of foreclosure and re-positioning of discount assets for at least another year. Could be two years, he says.