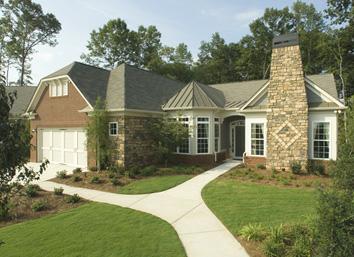 DURHAM – Sales have been so strong at PulteGroup’s Carolina Preserve at Amberly active adult community in Cary that the national homebuilder is making plans to build another massive community under its Del Webb brand.

PulteGroup, the largest homebuilding company in the Triangle, is targeting 363 acres off Leesville Road in east Durham for a neighborhood that would cater to adults ages 55 and older. Pulte filed a rezoning request in Durham County this week that, if approved, would allow for the construction of up to 4.25 housing units per acre, says Amy Wolff, a planner with the Durham City-County Planning Department.

Lawrence Lane, Pulte’s Raleigh Division president, says the company has not yet determined how many housing units the property could accommodate once recreation facilities and open space areas are factored in. “It’s too early to tell right now” Lane says. “We are clearly in the infancy stage.” Based on the similar sized Carolina Preserve metrics, the north Brier Creek community could easily have more than 1,200 homes at buildout. The mostly forested land is located north of the Brier Creek area and near the Durham and Wake County line.

PulteGroup opened Carolina Preserve off Yates Store Road in 2006 and has since sold more than 850 homes using the Del Webb brand. Most homes are priced between $190,000 and $400,000 with a mix of single family, townhouses and multifamily. The community features a 34,000-square-foot clubhouse with a fitness center, heated indoor pool, ballroom, and a stadium kitchen, plus outdoor walking trails, tennis courts and a 15-acre lake.

UNC Health Care staffs a wellness center in Amberly’s residents’ club building. Lane says the 380-acre Carolina Preserve community is still several years away from selling out its remaining 425 home lots, but the company doesn’t want to lose any sales momentum. “Given the success we’ve had at Carolina Preserve, we’d like to continue serving that active adult community,” he says.

Pulte's Approach is Spreading through the South

Pulte has more than 50 Del Webb active adult communities in 20 states, but Carolina Preserve is so far its only one in North Carolina. It has three in Atlanta. “I think it makes sense,” says Jim Anderson, president of Fuller Land & Development in Raleigh who specializes in land sales around the Triangle for real estate developers and investors. “(Pulte) has proven they have the right formula with Del Webb and done it with more success than anyone else. I see no reason why they couldn’t replicate that at a new location.” Anderson points out that it still could be three or four years before the first home could be ready for sale at the Leesville Road site.