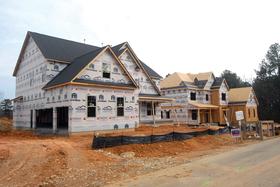 By fits and starts, the Triangle home building industry is getting back into a groove of construction starts and sales. Most of the excess inventory of speculative homes that weighed down the market in 2007 and 2008 is gone, and most Triangle home building companies that were polled by Triangle Business Journal expect homes in 2012 to start growing again.

"People who are relocating here from areas where they can't sell their home are not likely to buy homes here. That's why the apartments are going gang busters"

In 2011, home builders in the Triangle started construction of 5,464 homes, which was 6.5 percent fewer than in 2010, a year when sales were briefly inflated by an influx of buyers taking advantage of the new-expired federal New Home Tax Credit program, says Jay Colvin, Triangle region director for the housing market research firm Metrostudy. Triangle area builders had about an eight month supply of inventory at the end of 2011, which is consistent with the 12 year average for new home inventory.

The general feeling is more optimistic where the market is going Colvin says.

A Growing Field of Triangle Builders.

In 2011, Toll Brothers sold 104 homes in the greater Triangle, which was down from 120 home sales in 2012. Anhut says he'll be targeting a higher sales volume in 2012. I'm counting on it being more in 2012, he says. Another big national builder group in the Triangle, Beazer Homes, had about 330 construction starts in 2011 in the Triangle, which was up from 214 homes built in 2010, accorindg to Beazer's Raleigh division president, Todd Schermerhorn.

Drees Homes is in the midst of a close-out sale in five of the 10 communities where it is actively building in the Triangle, says Dave Hausfeld, and so he's actively shopping fo rmore land for more homes. We're selling so many houses, I can't keep up, he says. Drees' home sales have been steady the past three years, at around 100 units, and Hausfeld expects to maintain about the same number of sales in 2012.

ForeverHome of Raleigh, which built its first home int he Triangle in 2009, finished 2011 with 207 home sales, says President Larry Lippincott. He expects the company to be able to grow volume to 220 sales in 2012. No highs, no lows. Just keep the sales pace going, he says.